This is Part One of a three part series detailing my World War II collection. Part I deals with Nazi German artifacts, stamps, and coins. Part II focuses on the currency of Imperial Japan's occupied territories. Part III features notes from Theresienstadt concentration camp and Allied issued "Victory Money" from Germany and Japan.

World War II was the most devastating and widespread war in human history. Tracing its roots to the end of World War I, both Germany and Japan (although on the winning side, Japan was largely ignored at the peace talks) sought to redeem their "honor" through conquest. The war saw roughly 100 million take up arms, involved nearly every country on Earth (though many didn't take an active role in the physical fight), and resulted in over 60 million civilian and military deaths.

The destruction caused by the war and the amount of unadulterated cruelty expressed during it left a permanent mark on humanity's collective memory.

As the 70th anniversary of the end of WWII approaches (Sept. 2, 2015), the number of living witnesses to the horrors and triumphs of the war (as well as first-hand memories that can remind us of what that war taught us and of how we should always remain vigilant to the dangers of intolerance and all-powerful government) is shrinking.

As someone who grew up primarily in the post-Cold War era, but whose ancestors answered the call, my contribution to their sacrifice and victory must be ensuring that their legacy continues and that the tangible remnants of that time survive. I have put together a modest collection of artifacts from Nazi Germany, Imperial Japan, and the Allied occupation that followed. This collection will continue to expand, but given the significance of the upcoming anniversary I want to share with you what I have and the stories and meanings behind these objects.


NOTE: click on each image to view a larger version.

The first item is this 1935 Hitler Youth Sports Festival Pin. 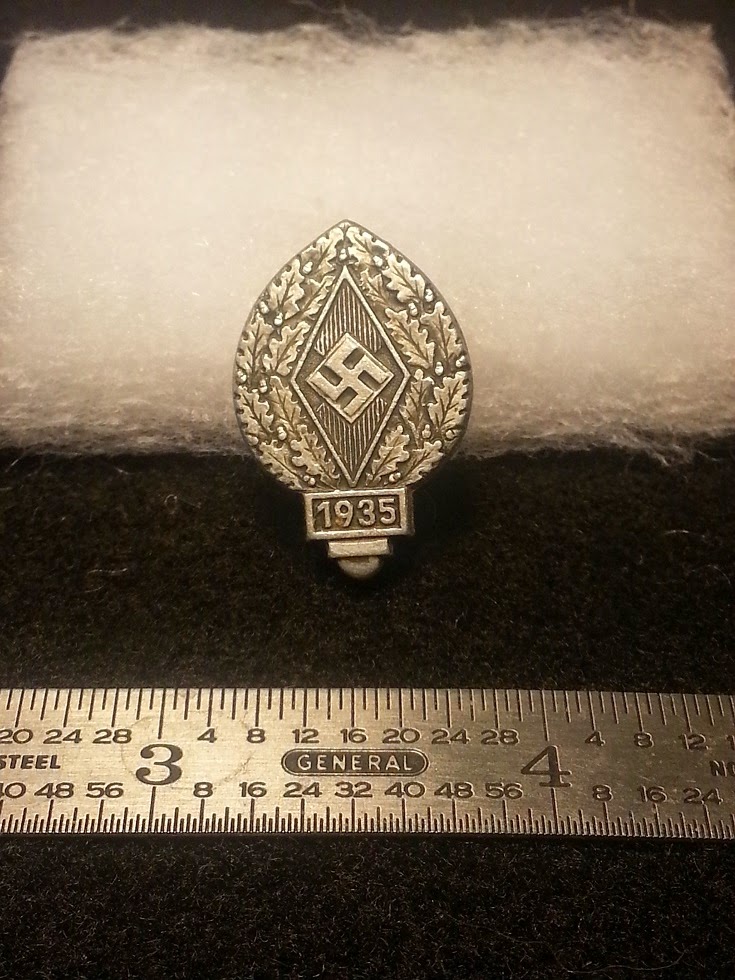 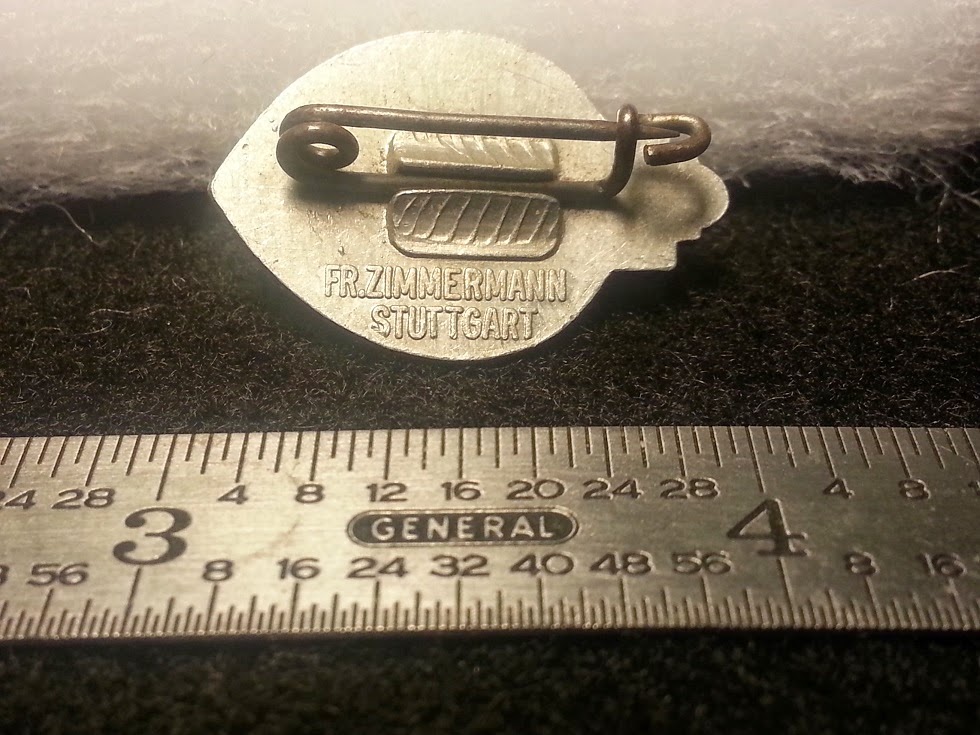 Nazi ideology held that "Ayrans" were a master race and that the primary Ayran group were Germans. The Nazis prized youth and used sports as a way to improve and buildup the next generation of this Aryan super race. The Hitler Youth had roots dating back to 1922, but by 1933 it had become the sole youth league in Germany and membership was, in essence, mandatory. The Hitler Youth also served as a means of indoctrinating each new generation in their racial ideology as well as being a paramilitary group. And, in conjunction with the Nazi breeding program Lebensborn, it was hoped that these organizations would ensure that the Third Reich would last a thousand years.

By 1935 some 60% of German youth belonged to Hitler Youth organizations. During the 1935 Sports Festival, various medals and pins were awarded to those who met the strict physical standards and who preformed in the numerous athletic events. These pins aren't necessarily rare, but they do underscore the lengths Nazi Germany went to to control every aspect of German life; and predominately, to control the nation's youth. 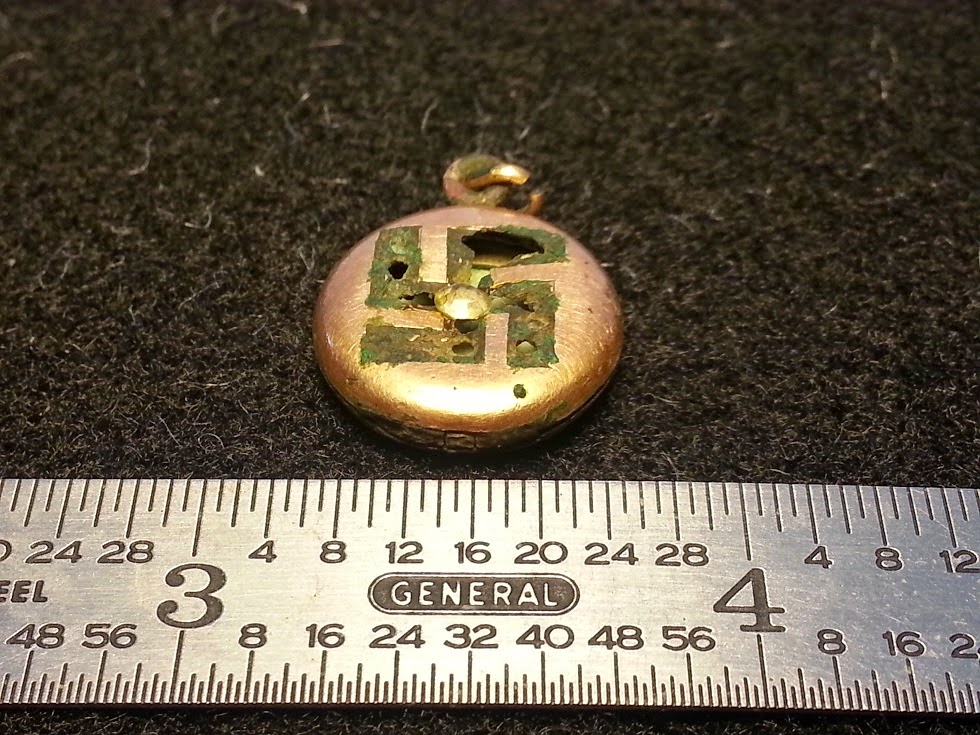 "Sweetheart" lockets have been around for centuries. They're used to hold a small picture of a wife, girlfriend, family, or other loved ones. This small 10kt gold locket has a bold Swastika on its front with a small diamond in the center. 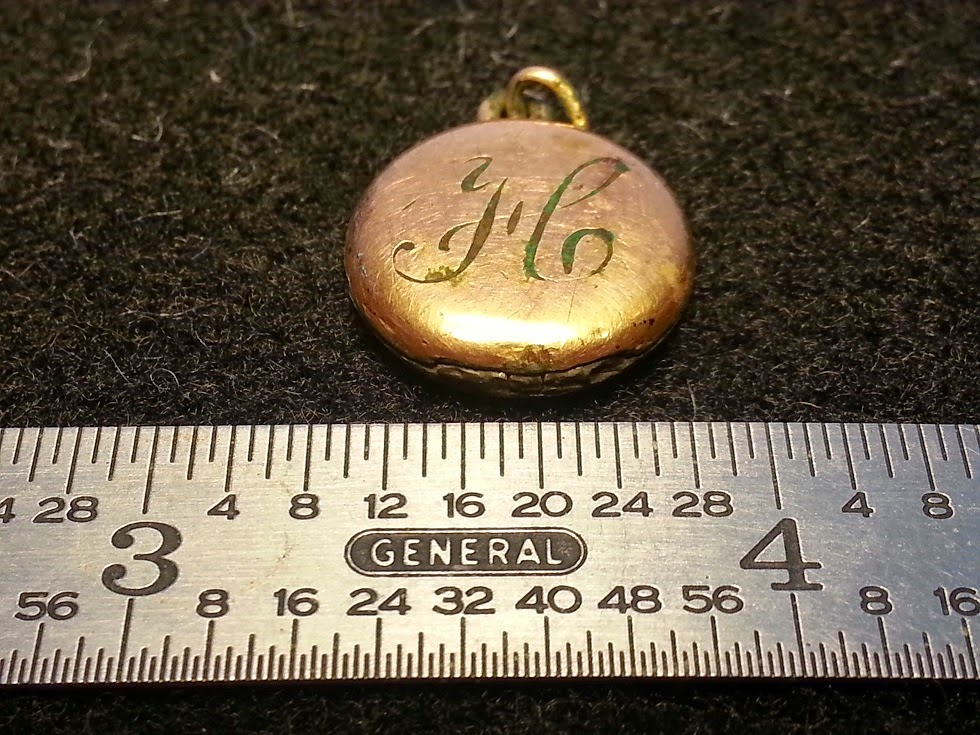 The back of the locket features a calligraphic "H", most likely in honor of Hitler. (Though, it's possible the owner's last name started with an "H"). 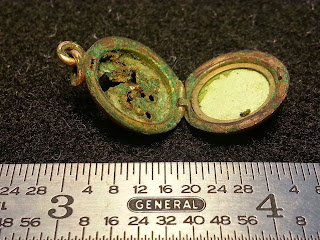 The interior has a small place for a round photo, a photo which vanished long ago.

When I first acquired it, I was overcome with emotion when confronted with the prospect that the soldier who owned the locket was killed and the locket taken by the victorious Allied soldier as a trophy (which was a very common practice among all participants of the war). And so, I was holding an object that embodied love and loss, victory and defeat, and life and death. However, after inspecting it longer, I have come to believe that it was found sometime after the German soldier was either killed or after he lost it during the course of the war.

The level of corrosion and lack of a photo is evidence that this had been stuck in the ground for some time, and wasn't taken immediately after a fight as a trophy. Despite not knowing the full history of this little artifact, it still represents all that is good and evil in humanity, and, for me at least, serves as a powerful messenger of the greatest war in human history.

The next set of items are various German stamps, beginning with a few pre-Nazi stamps and then others issued throughout the Nazi period.

Hitler's rise to power was helped in no small part by the failure of the Weimar Republic to stabilize Germany's economy after the First World War.

Here's a collection of these Weimar hyperinflation stamps. These were printed in 1922-23. Their denominations go from 100 Marks up to a whopping 50 million Marks (though others were made with far higher values). You can find some more information about these stamps here and here. 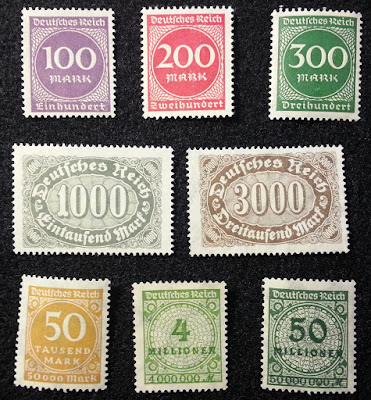 Below are 20 other Weimar stamps. The top row and first two stamps on the second row are hyperinflation stamps as well, going from 5,000 to 2 million Marks. They were overprinted on older, lesser value stamps, which is a very common practice during periods of rampant inflation. The next two stamps on the second row are 6 and 100 Mark stamps from 1921. The rest of the stamps are the same ones as above. 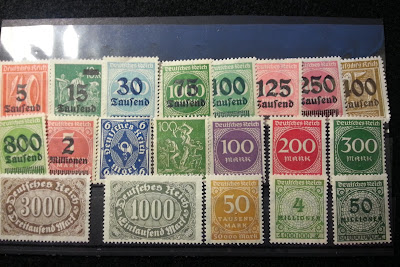 Now, onto the Nazi period stamps. 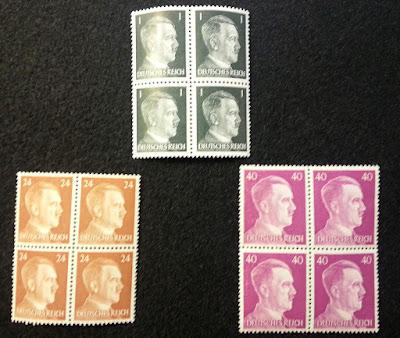 Starting in 1941, Germany begin printing this style of postage stamp which feature Adolf Hitler facing right. The denominations of these stamps ranged from 1 pfennig up to 80 pf. I have three blocks (original connected sets of the same stamp) of these stamps: 1 pf, 24 pf, and 40 pf. 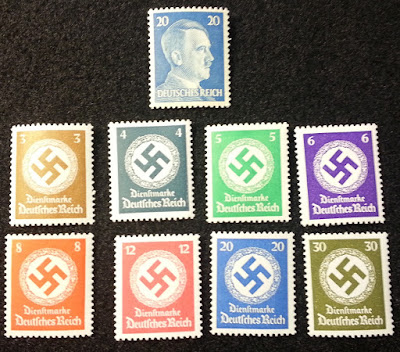 This grouping has another "Hitler Head" stamp of the same series as above, except it's a 20 pf stamp. The eight stamps below feature the swastika and were printed in 1934. The whole series' denominations range from 3 pf to 50 pf. The Michel Catalog numbers (MiNr) of these go from 132 to 143. My own German stamp collection is limited, but between 1933 and 1945, Germany had a lot of different stamp designs. If you'd like to look at others, check out this site.

Coins of the Reich that was to last a thousand years are less varied than their stamps. 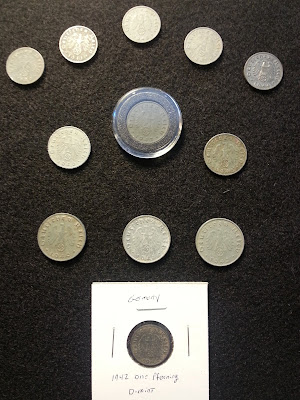 Here's a closeup image of each denomination. 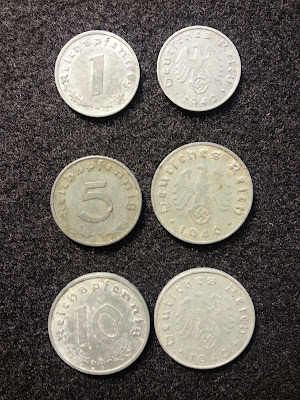 From 1936 onward, with the exception of two specially produced silver coins, all regular issue coins bore the state emblem of Nazi Germany - the eagle and swastika.

I also have a simple 1 pf coin that has been made special by the presence of a fingerprint. I don't know when the print was made, but usually for the oils of a finger to permanently affect a coin it needs to happen while the coin is still in mint condition. This leads me to believe that the fingerprint was laid by one of the first people to touch that coin during the war. You can see the lines along the top. 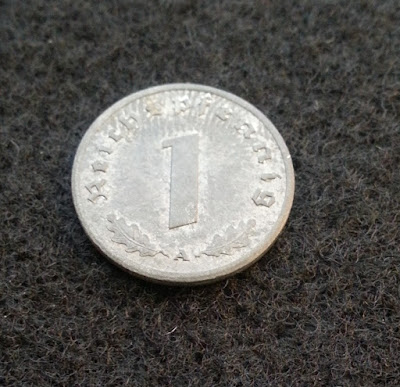 Finally, I have 4 silver coins to show you. 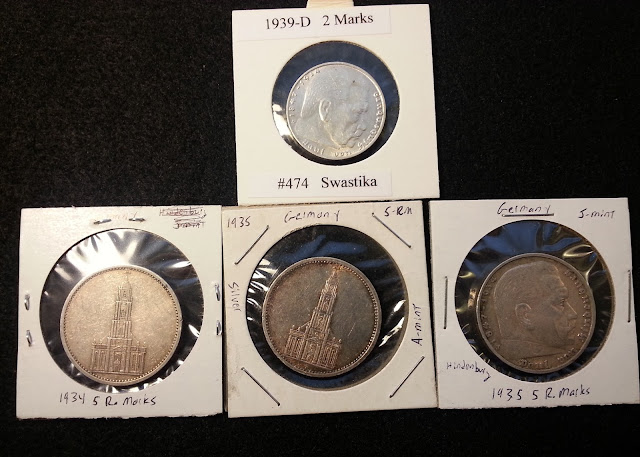 The top coin is a 2 Reichsmark silver coin minted in 1939 at Munich. It features Paul von Hindenburg who died in 1934. The bottom right coin is a 5 RM version.

The other two coins on the left are also 5 RM silver coins and they bear the Garrison Church in Potsdam, Germany. Most of the church was destroyed during an air raid in 1945.

Here's a picture of the reverse side of these coins. 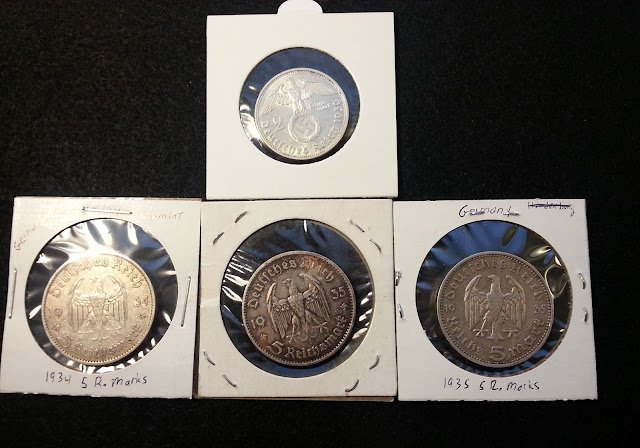