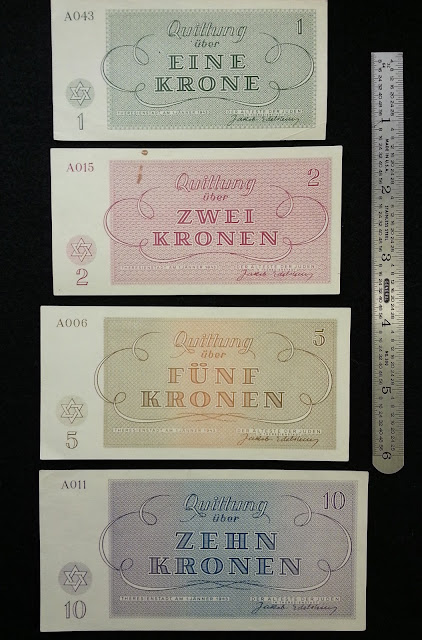 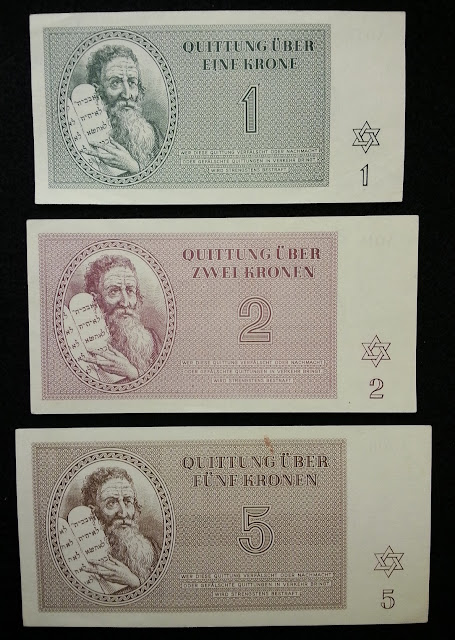 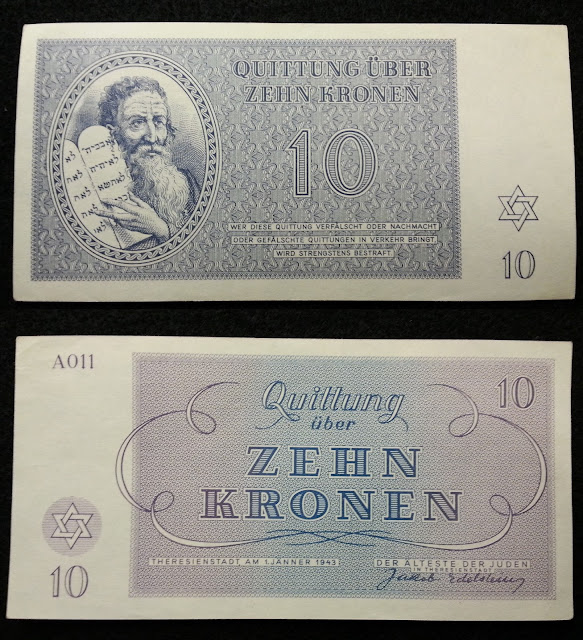 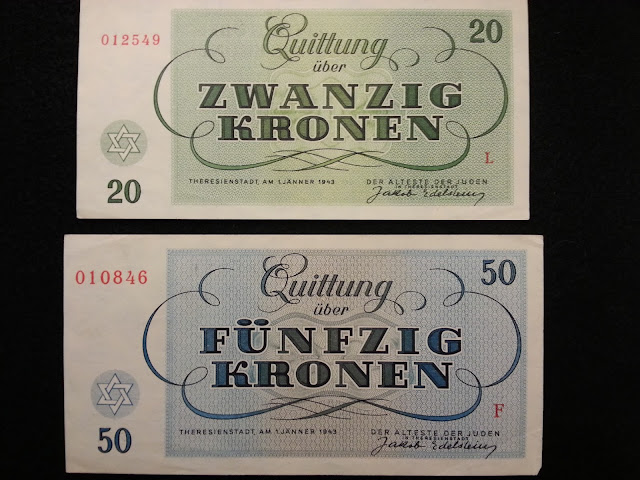 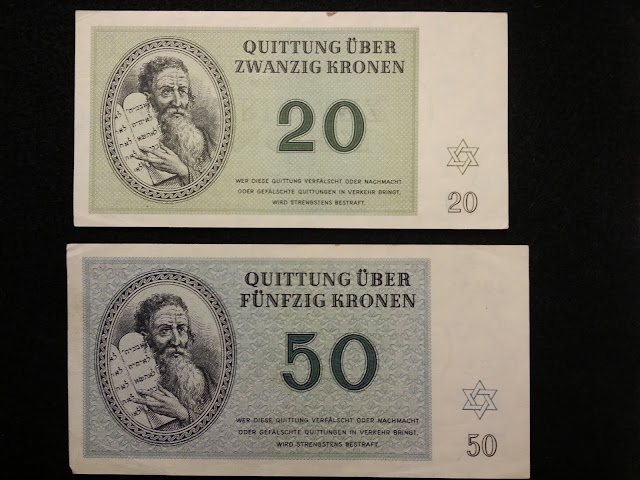 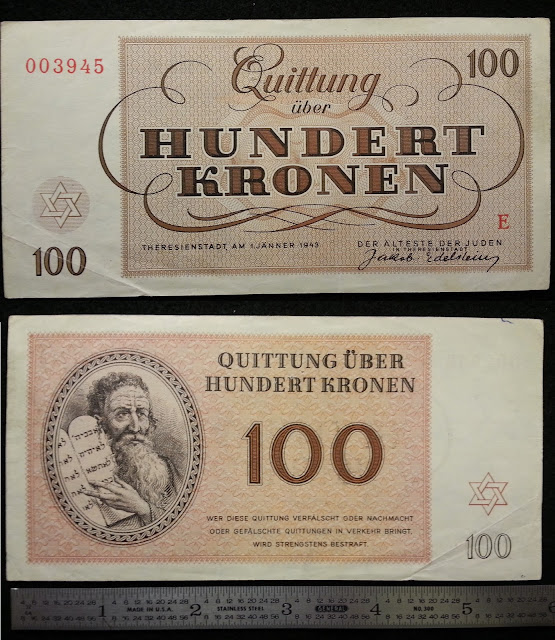 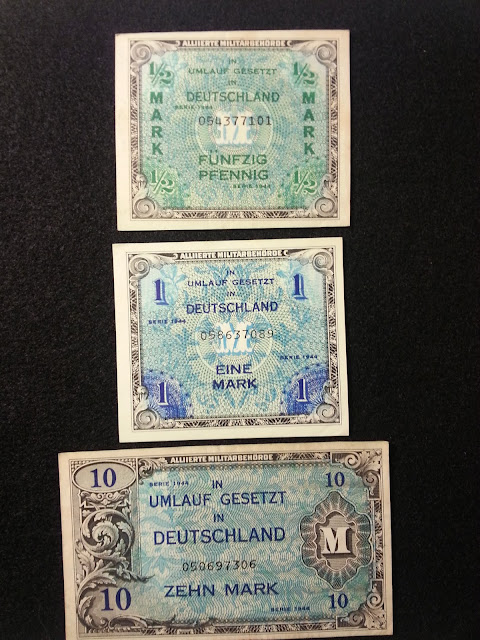 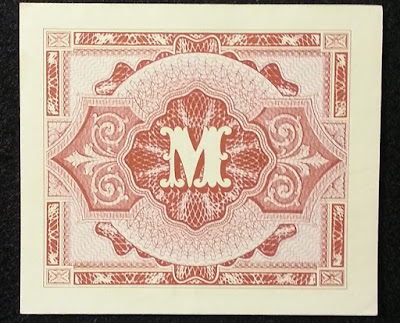 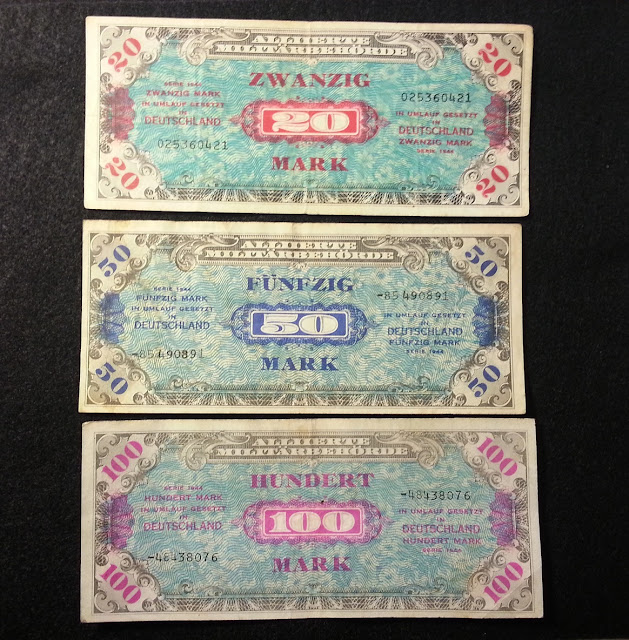 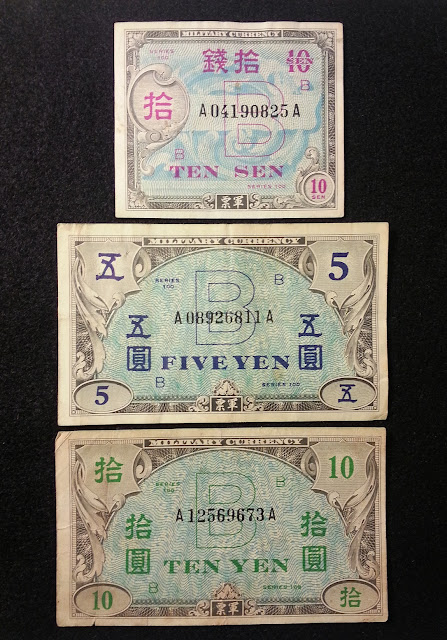 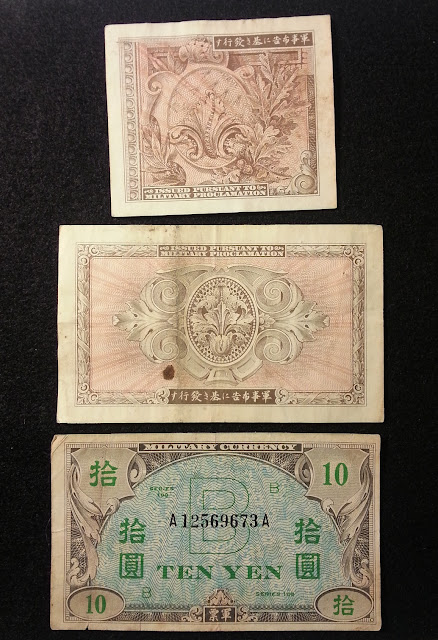 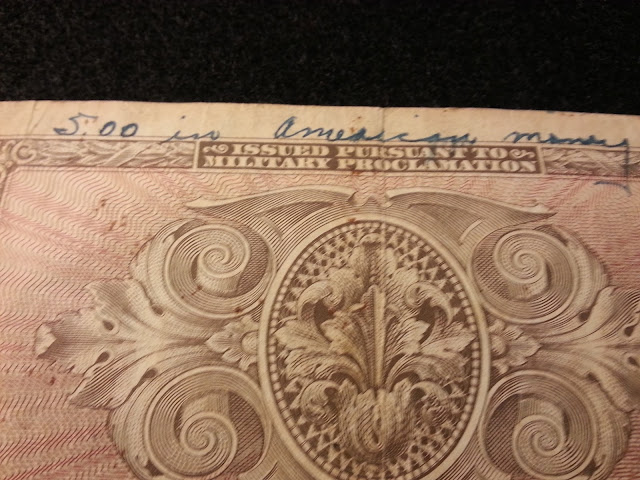 Twitter.com/JacobBogle
Posted by Jacob Bogle at 8:16 PM No comments:

This is the second part of my three part series detailing the World War II artifacts, stamps, coins, and banknotes in my collection. You can read Part I here which deals with artifacts, stamps, and coins. Part III focuses on the camp currency of Theresienstadt and Allied Military Currencies.


In recognition of the 70th anniversary of the end of World War II (Sept. 2, 2015) , I wanted to share my WWII collection. As the number of living witnesses to the horrors of the war and to the ultimate victory of liberty over tyranny decline, the importance of having physical artifacts grows. Through these pieces of paper, which also managed to survive years of war and the decades that followed, we can learn about the realities of the history, politics, economics, and even the crimes against humanity that occurred.

This post focuses on some of Japan's occupied territories: Burma, Dutch East Indies, the Philippines, and Malaya. The third and final post will exhibit currency printed at the Theresienstadt concentration camp as well as victory currency issued by the Allies in Germany and Japan.

As Japan conquered new territories they needed to incorporate them into the overall economy (besides just looting and exploiting). This led to the creation of the "Greater East Asia Co-Prosperity Sphere," a concept similar to what Germany had envisioned for Europe under Nazi hegemony.

Members of the Sphere included Japan, Manchukuo (Manchuria-China), Mengjiang (Inner Mongolia-China), the Reorganized National Government of China, Burma, Philippines, Vietnam, Cambodia, Laos, "Free India", and Thailand. Additionally, the Dutch East Indies (mostly today's Indonesia), Malay states, and a few smaller locales had their economies usurped and had new occupation currencies imposed on them. By March 1945, the Southern Development Bank, which issued the currencies, had an outstanding balance of more than 13 billion, an immense sum.

Here's the reverse side of the notes

For my own collection, I currently only have guldens.


Here's the reverse side


Philippine Notes
As with Japan's other conquered territories, the occupation forces issued new currency for the Philippines. Locals often referred to the money as "Micky Mouse Money". This term belies the economic reality that when Japan overran American forces and took the country, they confiscated millions in American currency (which was backed by gold) as well as bullion to use in their war efforts. In turn, Japan issued these "Micky Mouse" notes - fiat currency that was backed by nothing but force.

The 1942 issue had notes ranging in denomination from 1 centavo to 10 pesos. As inflation began to worsen, Japan reissued notes between 1943 and 1945 that had denominations of 1 peso to 1,000 pesos.

Here's the reverse side of the notes.

During the occupation, the Philippines saw many guerrilla groups and uprisings. Local areas would issue their own "emergency currency" backed by the government-in-exile. Though these notes were illegal in the eyes of the occupying authorities, millions of notes from multiple areas were printed. These were largely basic in design and used low-quality paper, meaning much of the existing notes today are in poor condition. Additional information can be found here.

This is a 50 centavo note from 1942 (Pick #S576c). It was issued by the Misamis Occidental Agency of the Philippines. 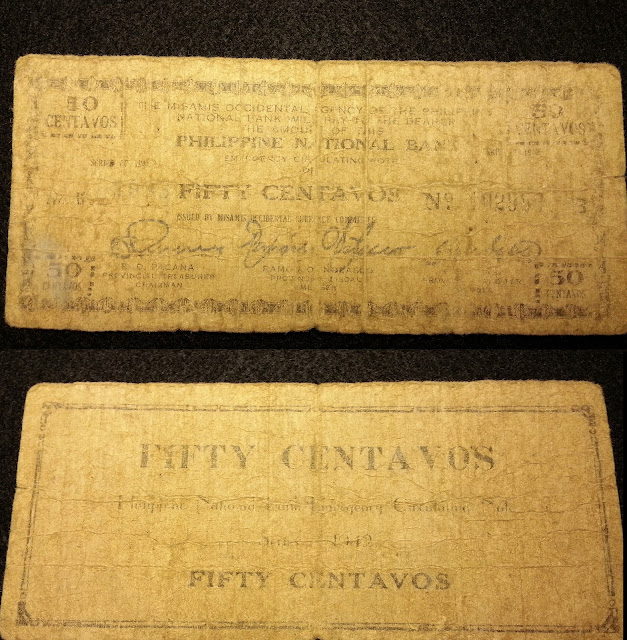 Here is a 1942 5 pesos note issued by the Bohol ECB (Pick #S136d). The signatures on the reverse side are common to this note and may have been a way to deter counterfeiting. 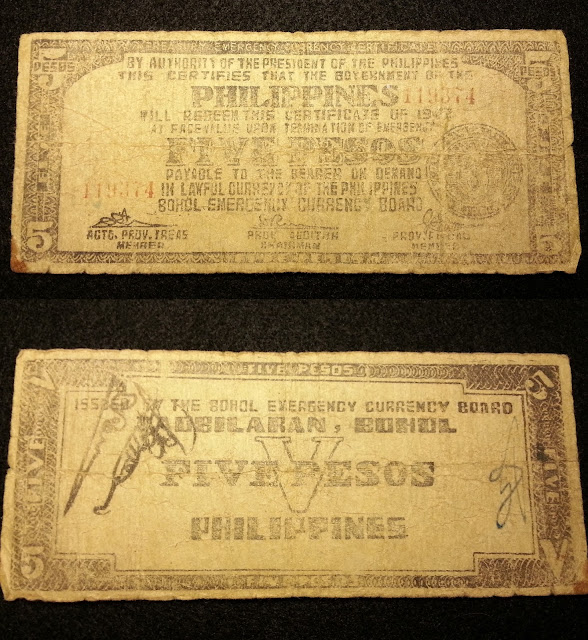 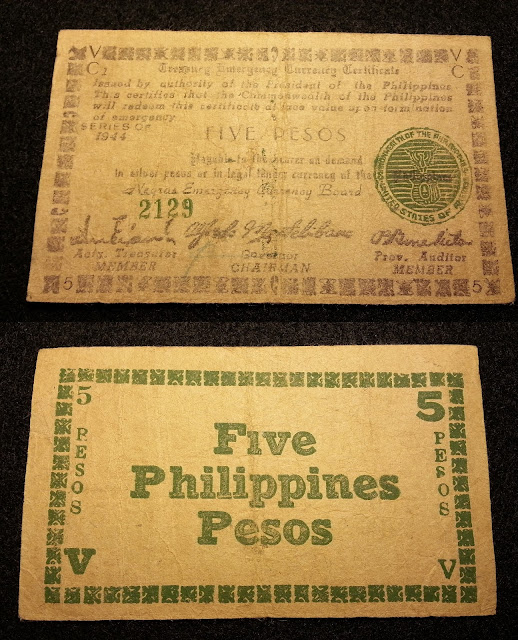 Lastly, for the Philippines, I have a 2 pesos issued in 1942 by the Negros ECB (Pick #S647a) and a 10 pesos note, also from 1942 but issued by the Mindanao ECB. I'd like to mention that during World War II, Mindanao was the site of an important battle involving tens of thousands of soldiers and was key to the liberation of the country in 1945.


Malaya Notes
Occupation currency was issued for Malaya, Singapore, North Borneo, and Brunei from 1942 to 1945. In part due to the fact that many notes lacked serial numbers, and because local officials would simply print more money whenever they needed it, inflation took off in 1944 requiring the introduction of 100 and 1,000 'dollar' notes. The total denomination range was 1, 5, 10, and 50 cent note and 1, 5, 10, 100, and 1,000 dollar notes. Unlike many of the notes produced in other areas, the Malaya dollars weren't simply copied off a press and they have a feel similar to that of American currency - with raised ink.

I also have the 100 dollar note (Pick #M8c). I think this is one of the more aesthetically pleasing invasion notes issued by Japanese authorities in any of their territories.