Most people know about Zimbabwe's trillion dollar notes or have heard stories about Germans using worthless Marks for wallpaper, but what few realize is that Hungary broke all the records.

During this time Hungary printed 2 record-shattering banknotes. One would be the highest denomination ever issued, and the other the highest ever printed. 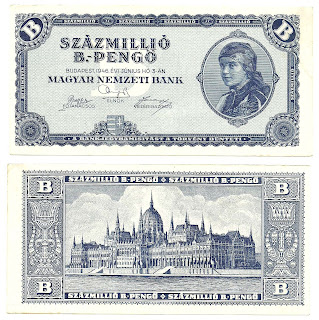 The 1946 Egymilliard-B Pengo (Pick #137) had a value of  1 milliard B or 100 million trillion, 10^21 was printed but never released. However, some made their way into collectors hands and in un-circulated condition would be worth $200+.

Shortly after they began printing a new note, the Adopengo (tax pengo), but it too suffered from rampant inflation creating the need to print a 10,000,000 Adopengo note.

All of this reminds me of our current situation in the US. Since the introduction of the Federal Reserve Dollar in 1913, it has lost nearly all of its value  - being worth only $0.04 today compared to 1913. The Federal Reserve announced today that it would initiate a new round of quantitative easing (QE3) which basically means printing more money without any real value behind it. Even experts doubt it will help our economy and will bring commodity prices higher and higher. Could we too be on the verge of a 100 quadrillion dollar note?
Posted by Jacob Bogle at 9:13 PM